Finding A Way Through - where all of this began

Uncategorized Sep 10, 2018
This time last year, I wrote a post. This post explained the journey I was on to take the brave step of posting more blogs and building more of a presence online.
Do you ever just get it in your head to do something?
Well, me too. I got it in my head that whether anyone read it or not, I was going to put out a blog every week and just see what came of it.
I read this story:

Mark 5:27-34  She had heard about Jesus, so she came up behind him through the crowd and touched his robe. For she thought to herself, “If I can just touch his robe, I will be healed.” Immediately the bleeding stopped, and she could feel in her body that she had been healed of her terrible condition.Jesus realized at once that healing power had gone out from him, so he turned around in the crowd and asked, “Who touched my robe?”His disciples said to him, “Look at this crowd pressing around you. How can you ask, ‘Who touched me?’ ”

But he kept on looking around to see who had done it. Then the frightened woman, trembling at the realization of what had happened to her, came and fell to her knees in front of him and told him what she had done. And he said to her, “Daughter, your faith has made you well. Go in peace. Your suffering is over.”

and found this picture: 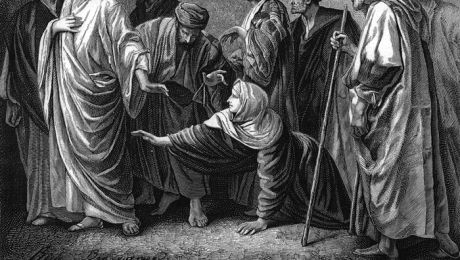 Then I took a deep breath.
Then I did it.
I posted nearly every week for 10 months straight.
In the end, I did not become a major voice shaping the internet, but I did make some new friends. I also connected to people in a new way that I found tremendously rewarding. Another exciting result was some new opportunities to speak opened up for the coming year.
But nothing else really compared to the feeling of making a promise to myself (also to God, although He is much more patient with me than I am with myself) and keeping that promise.
Fear and Intimidation are strange creatures. They affect both men and women, but I find both characters to affect us in different ways.  I will leave you to decide how it affects you.
This past weekend I had the opportunity to speak at a women's conference up in the mountains of beautiful BC. I shared some of this challenge of facing down fear and I showed them this picture: 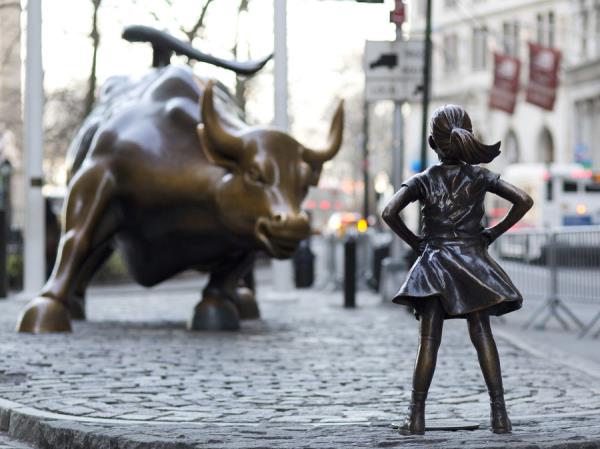 This picture has come to mean so much to me.
Two years ago, I was away from home getting ready to do something brand new for me. I texted my husband, Shawn and told him that I was shouting down some big "what if's" and some other miscelleneous fears. That is when he sent me this picture with three words:
Be That Girl
Fear,  with its steaming hot breath is charging at you?
Put your hands on your hips and stare it down.
Be That Girl
Be That Guy
Be the one that stands when everyone else runs away.
Romans 8:31 What then shall we say to these things? If God is for us, who is against us?
We must be very brave.
I told this story to that room full of women. Then I asked them to do something crazy with me.
I asked them to picture that thing in front of them that would try to stop them...
fear of failure, fear of rejection, ridicule, uncertain outcomes, whatever it is, I told them to picture it like that bull, trying to stop them. "Then, when you are ready," I said "I want you to stand with your hands on your hips and say it or whisper it, maybe even yell...what ever you need to do but say "I will not be afraid"
And guess what happened?
Nothing.
Nothing happened,
At least for a few minutes. Then, one or two quietly stood, Then nothing again. Then one brave soul in the back said loudly: I AM DOING THIS!
Then like a dam, they all broke out. 40 or so women, all around 40 and up, stood with tears flowing down their faces and said it out: I will not be afraid.
Again and again we said it until we really meant it.
I WILL NOT BE AFRAID
It took my breath away.
It brought back my story here of the woman in Mark 5, desperate enough to break out of the box. Sick and tired of trying to find solutions with no real change.
But one day, her desperation caused the innovation that she needed to get to Jesus. She broke the mold, She had to have said something like "I don't care if they kill me, I am touching that robe!"
She got what she came for.
What a story of hope for all of us.
I am more sure now than ever, that the very frustrations that are keeping us anxious or worried are also the invitation to get desperate so that we can build something no one has ever seen before.
Of course it is scary.
But we must be very brave.
Maybe you are being challenged to break out or do something new or maybe you just need courage to handle the things on your plate today.
Maybe you just need to find a place by your self and put your hands on your hips and say with all your might:
I WILL NOT BE AFRAID.
I hope you do. We are all cheering for you.
xoxo, Keri

Receive a daily email with a dose of encouragement to live on purpose.

Receive a daily email with a dose of encouragement to live on purpose.